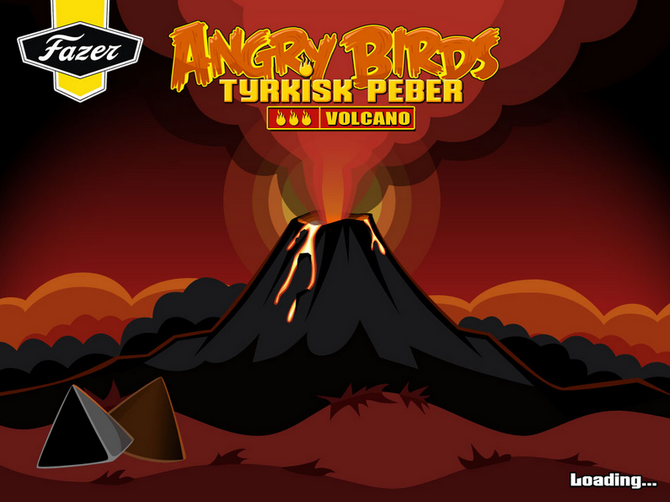 Angry Birds Volcano (also known as Angry Birds Tyrkisk Peber) was a co-marketing promotion with Rovio Entertainment and Fazer Confectionery Ltd. in Finland. The promotion involves an exclusive, themed mini-game version of Angry Birds similar to Angry Birds Vuela Tazos and Angry Birds in The Hunt For The Golden Pistachio where players require codes from product purchases to play the game. Volcano was the first promotion of this kind. It was later discontinued however. You can go to this page to play the game.

The site contains a brief description of the promotion in English:

The trailer starts when Red, Chuck, Bomb, and Blue were all on Hawaii islands a beach. Red takes a bite of volcano and saw that it looked dangerous. Bomb steps up to the volcano, looks at everyone strangely, and eats it. After he eats it he blows up.

The game promotion won an award by Sub TV for “Most Interesting New Competition.”

Tyrkisk Peber is Danish for "Turkish Pepper” and is a strong licorice and pepper candy, made by the Finnish company Fazer. It was originally invented by Per Fjelsten of the Danish company Perelly in 1976. The company was later obtained by Fazer.[2]

The game site contains a brief description of the Volcano candy, translated here from Finnish to English:

Completely new soft Tyrkisk Peber Volcano contains taste buds burning lava filing. There are two challenging flavors in the bag: spicy soft licorice (brown) and sharp burning salty licorice (black). It is a three-flame product. Do you dare to taste? Turkish Pepper is anything but tame and reserved. 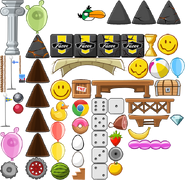 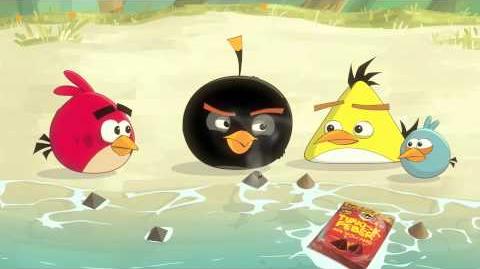