Angry Birds Vuela Tazos was a co-marketing promotion with Rovio Mobile and PepsiCo in Mexico. The promotion included Angry Birds themed toy discs and an exclusive, themed mini-game version of Angry Birds, similar to Angry Birds Volcano and Angry Birds in The Hunt For The Golden Pistachio where players can earn prizes for high scores.

PepsiCo subsidiaries participating in the promotion were:

There were 2 Vuela Tazos competitions, one with regular Angry Birds gameplay, and second themed after Angry Birds Space. Both are unavailable now.

The name “Vuela Tazos” (“Flying Tazos” in English) refers to Angry Bird themed Tazos or toy discs that are included with the Sabritas, Gamesa and Sonric’s products. Further information regarding Tazos can be found here: http://en.wikipedia.org/wiki/Tazos

A complete list of all available Tazos from Sabritas products can be found here: http://www.vuelatazos.com/documents/Coleccion_Sabritas.pdf

A complete list of all available Tazos from Gamesa products can be found here: http://www.vuelatazos.com/documents/Coleccion_Gamesa.pdf Gamesa products also offered stickers overlays for Tazos and a coupon Tazo that offered $10MXN off an Angry Bird keychain.

A complete list of all available Tazos from Sonric’s products can be found here: http://www.vuelatazos.com/documents/Coleccion_Sonrics.pdf

The game consists of six exclusive game levels, with the final three being available to play only with codes obtained from Pepsi product caps or codes found in Sabritas or Gamesa products. The top 50 scoring players are chosen as winners weekly from January 9, 2012, to March 11, 2012. Once the competition is over, the game will still be available to play until July 31, 2012. The game cannot be played on mobile devices and was optimized for use with the Google Chrome browser, according to the footnote on the site. The site requires players to create an account to participate. Also, when the competition finished, all levels became unlocked, and there's a link for Angry Birds Google Chrome and Angry Birds Friends. This game uses the Chrome sprites.

The final three levels are themed from the PepsiCo subsidiaries participating in the promotion. These levels include cameo appearances from their corporate mascots.

In the second competition, there were different levels, up to 9, they weren't weekly, but all of them had a possibility to use special power-up called "Tazos Power", so far, there are only 2 videos about it: here and here

An FAQ for the game/competition is included on the site. An English translation of the FAQs (via Google Translate) is provided below:

How do I get codes to unlock levels 4 to 6?
You can get the codes on the caps of Pepsi and the Flying Tazos special codes found on products Sabritas, Gamesa and Sonric’s for more information see www.vuelatazos.com

How long is the competition?
There is a weekly competition for every special level from Monday to Sunday. The table marker restarts Sunday at midnight.

Who wins once the competition is over?
Each of the players at the table will win a prize marker. There are 50 winners for each level and the list is reset every Sunday at midnight to start anew each following Monday until March 11. Only 50 players with the highest score for attempted each of the 3 special levels appear in the list of winners.

What are the requirements to participate?
The promotion is valid throughout Mexico and may participate in the weekly competition for any person who holds a valid code. Offer valid from January 9, 2012, to March 11, 2012

When will I receive my prize?
The weekly winners will be contacted via e-mail to provide an address for delivery of prize. It is important to make sure that the email you provide during registration is valid, otherwise, it will be impossible to contact you.

Can I play Angry Birds Flying Tazos on my phone or mobile device?
Unfortunately, the game only works on browsers on personal computers.

Why does the game slow down or brake or locks when playing?
Make sure you do not have multiple instances of the game in different windows open, otherwise, try playing the game on a computer with more memory or a faster processor.

Why does the game run slowly on my computer?
Try updating the video drivers.
AMD - http://www.amd.com
Intel - http://www.intel.com
NVIDIA - http://www.nvidia.com

Several commercials were created for the promotion and can be seen below. 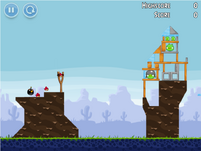 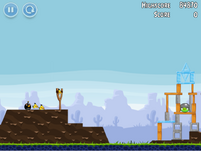 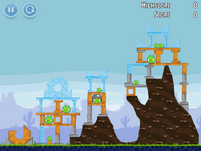 The website now. (It says Thank you for visiting Angry Birds Vuelatazos! The promotion is over.)