The game consists of 5 exclusive game levels, with levels three through five being originally available to play obtained from packages. When playing the final three levels, a golden pistachio may randomly be included in the level. Originally, destroying a golden pistachio would gain the player an instant prize to be redeemed later. The grand prize was $1,000. During the promotion, there were some issues with availability of products with the game in some areas.

When the original promotion ended, a new promotion called “The High Flyers’ Contest” was launched where all levels were unlocked and golden pistachios continued to be added for extra points. Players take a screenshot of their high score and post it has a Facebook page. Each day, 10 winners receive a purple Hong Kong Angry Birds plush. The contest ran from February 8, 2012, to March 5, 2012.

Unlike the other promotional mini-games, this game has only five sequential levels, but includes one “Secret” level for a total of six.

The game cannot be played on mobile devices and requires the Google Chrome browser, which it states it was optimized for. A Facebook login was required to participate.

An FAQ for the game/competition is included on the site:

While no commercial exists for this promotion, an animated commercial was released prior to the promotion for the Game Commercial” campaign and can be seen here: 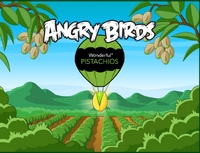 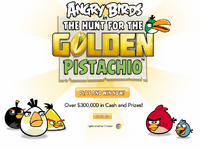