Angry Birds in Ultrabook™ Adventure is a game made by Rovio and Intel. For the game, enter this Facebook's link. The game is a bit different from other games because of the new sprites and blocks. There are 10 levels in the game. Also, this is the only game where the beginning story is seen from the levels menu. In this game you can embed levels, to get crowns and share your score like in Angry Birds Friends but unlike Angry Birds Friends, there are no power-ups. 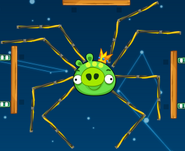 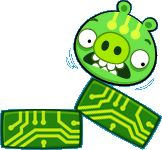