This is a list of Angry Birds references in movies, television shows, books, magazines, anime/manga, and others.

In Season 23 Episode 5, The Food Wife, there is a parody of Angry Birds, which is called the Furious Fliers. As shown in the episode, a man is trying to pull a bird, but instead of hitting the targets, it accidentally destroys a Children's Hospital construction site. It falls on the TNT Crate, which explodes, making the people happy. The music playing during the Furious Fliers segment seems to be a parody of the Angry Birds theme itself.

In Season 23 Episode 11, The D'oh-cial Network, Nelson references the game by saying "Here's my favorite computer game, Angry Nerds!", wedgies one kid and flings him at a bunch of others.

In Season 25 Episode 11, Specs and the City, Homer spots an Angry Birds fanfiction called "I Love You, Corporal Pig".

In Season 11 Episode 15, Peter falls onto a Pig structure from the Poached Eggs episode, crashing onto all the pigs except 1 Minion Pig. The Minion Pig grins, causing Peter to start to yell and curse.

A minion pig in Family Guy.

In Season 3 Episode 22, Rallo askes Holt Richter if he has Angry Birds on his phone, to which Holt responds with "I'm sorry, but my mom says that no one else can play with it".

During the nuclear summit scene in this film, Zartan, disguised as the US president, is seen playing Angry Birds on an iPhone while his nuclear missiles flied towards his fellow world leaders' countries. At one point, he called out "High score!"

It begins when Red is walking home when he sees Girl Bird cheating on him he goes to work and his boss (possibly Bomb) says you're fired! So he comes home and watch the news then he sees the Minion Pigs and King Pig says (This land is for the pigs, not for the birds!) so Red gets angry and gathers all the birds to him and he makes a plan. So they launch him on the slingshot but it fails. 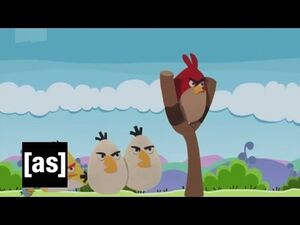 MAD has published 3 magazines featuring Angry Birds on the main cover throughout 2011-2015.

Making fun of the NSA controversy of 2014

Angry Bird Management is a parody of Angry Birds on the popular Cartoon Network show, MAD in 2011. A psychiatrist named Doctor Robert Hexenblatt tries to rid Birds of their "Angry Bird impulses", and teach them to not try to destroy Pigs' homes (probably not knowing that the Pigs stole the Birds' eggs). He first tries "Squawk Therapy", where he gets a bird to squawk like normal birds instead of laughing menacingly. Then, he tries "Behavior Analysis", where he gets birds to treat pigs nicely, and finally, "Roleplaying", where he dresses birds up as pigs, and himself as a bird and tries to see how birds would feel if someone was trying to destroy their home.

On November 24, 2011, PopCap posted this image to their Facebook which depicts Red being served as a Thanksgiving Dinner to the PopCap franchises.[1]

According to a 2012 interview on The Ellen Show, Kermit The Frog's favorite game is Angry Birds because you get to throw things at pigs.

Angry Birds was referenced during 2012 in the Sesame Street Special, Elmo’s Alphabet Challenge in a section called “Angry Words” where Elmo would need to catch whatever was launched from the slingshot to see if it starts with the letter on the flag on top of the structure.

A hint to the Super Bowl Golden Egg appears on a box. On it, there's Red with a golden egg and 13-12 above.

In the Golden Egg, there's the word Rio written with materials. No surprise as there is a crossover game.

In the bootup animation for external Roku systems, the "U" in the logo can be seen flung in the background with the white clouds following it's trail. The "U" then lands with the other 3 letters when 2 red feathers and a "5000" appearing from the "U". 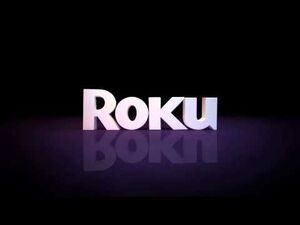 The show itself uses an animation every similar to Piggy Tales on its two latest seasons. The birds on the cartoon also portray various similarities to the birds on the game. In an episode, there are a lot of birds that are arranged in a suspicious way, for example, there are three bluebirds on a tree, two yellow birds on another and there is a large robot Red Bird as the main character.

The birds on the show are mostly fat, have big eyebrows and hair that kind of resembles the birds of the series. No surprise as Oddbods could be watched on Toons.TV. The name of the birds in this cartoon is also Angry Birds.

In the Brazilian cartoon, there is a spoof of Angry Birds named Angry Breads, which is played by the characters. Instead of birds and pigs, the characters are different forms of breads.

Angry Birds has been a reference in Pocoyo in one episode.

Garfield appears chasing a Red look-alike after being launched off the Slingshot on a comic's header.

The game, Unicorn Bust which Captain Lion is shown playing is a parody of Angry Birds, instead of having the Birds and Pigs, it has an Unicorn and the Rats.

Red and Chuck appear in Season 1 in the episode One-shot Wonder, where Chuck flies from the slingshot and falls down the gorge. Red later appears as one of the items in Cooking For The Grater Good.

In the 2012 set of Garbage Pail Kids (a well known satirical collectable card line with the garbage pail kids in crude and gross situations) had a card that commemorated Angry Birds with one of the characters Bruce being in the shape of a Corporal Pig with the original title "Birdbrain Bruce" with Red, Chuck and Bomb landing overhead of him. For unknown reasons, this was changed in later reprints with the title being "Angry Al" (or the other way around).

In Twitter Object Show 1: Slingshot Shenanigans. you can see that the challenge is actually Angry Birds. and some sprites were used then edited. For example: the smiley face object was more distorted. And the slingshots looked very similar.

The objects were edited. but the Minion Pig is actually a drawn feature. 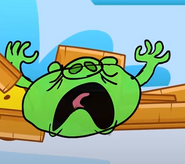 The Classic Flock appears a lot in this flash game and they have no faces.

In the level APPS, The flock appears again. but as projectiles. instead of being shot from a slingshot. they are mostly shot by cannons.

In The final boss of the game. you have to press some buttons to get to the next phase. The weapon for defeating the final boss is Red.

Bomb has his white spot in the game like his old design. 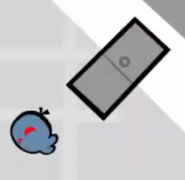 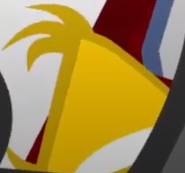 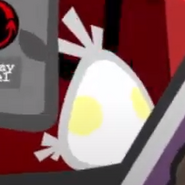 During Summer of 2013, Disney made a line of clothing that had the title "The Original Angry Bird" with an angry Donald Duck on it. The design was sold in Disney Parks on items such as t-shirts, pins and hats. 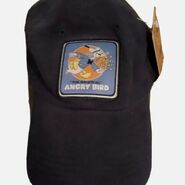 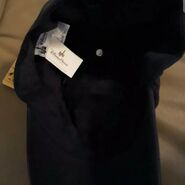 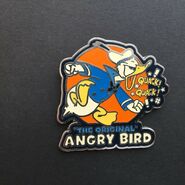 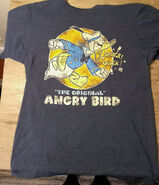 In episode 2 of the Nickelodeon web series "Portal Chase" that aired on November 21, 2021, characters from SpongeBob, Loud House and Henry Danger chase a giant slug into an Angry Birds parody called "Angry Pigeons" where Arnold & Gerald help them out.

Who Wants to be a Millionaire

In April of 2022, one of the questions asked to the participant of the game show was "what animals are the main enemies of 'Angry Birds'?" 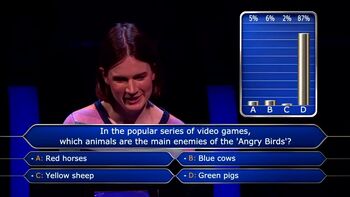 In Transformice, there is an Easter event title called "Angry Mouse".