Angry Birds on The Run

Angry Birds on The Run

The intro of season 1 of Angry Birds on The Run.

Angry Birds on the Run is a British animated series based on the Angry Birds series. A trailer was released on November 10, 2018, and the first episode, "On The Other Side", was released on November 17, 2018. The first season ran from late 2018 to early 2019, with a cliffhanger ending in the season's finale. A second season was announced in May 2020, and its first episode, "Here We Go Again!", premiered in June of the same year.

Angry Birds on The Run follows the Angry Birds, who were somehow taken to the human world. There, they discover that, if they do not manage to make it to their world in time, the entire Angry Birds franchise would be replaced with another one. With this fact in mind, they try to find the phone that sent them to the human world while they face the odds of this strange universe.

Each episode is typically two and a half minutes in runtime.

When Red, Chuck, and Bomb are accidentally released from their app game world and into the human world, they get into wacky misadventures trying to find a way back. Meanwhile, they are being hunted down by an unknown person.

The first season began on November 17, 2018, with the first three episodes being uploaded an hour apart from each other. However, two episodes were released after 2 weeks. The first season ended on May 4, 2019, with the episode Behind The Scenes Special. 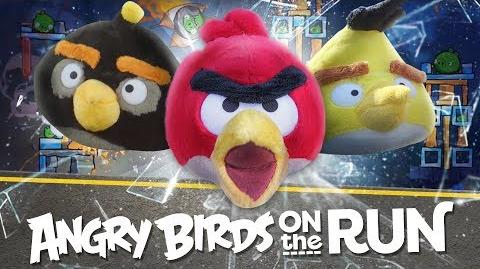