Arctic Eggspedition is the seventeenth episode in Angry Birds Seasons. This is the fourth Christmas-themed episode and the second and the final episode of the Season 2013 package. It was first revealed on AngryBirdsNest on November 22, 2013.

It is based on Christmas 2013. It introduced the festive spirit with 25 advent calendar levels – one for each day leading up to Christmas as well as 4 bonus levels. 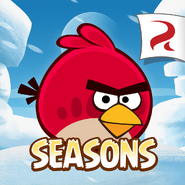 The furnace you get after completing the episode

The furnace you get after 3-staring the episode
Español Polski Русский
Community content is available under CC-BY-SA unless otherwise noted.
Advertisement