Axel is a bird that appears in The Angry Birds Movie 2. He is voiced by David Dobrik.

He is a Golden Eagle (or Philippine Eagle), with a white torso, brown head with a sharp yellow beak and claws of the same color, brown wings, long tail brown feathers, and red hair. He wears a blue Eagle Island Security Hat and a black belt.

He is serious sometimes but loves to breakdance and make breakdance battles sometimes. This is shown when the Harvey accidentally started to make random moves and it looked a type of dance, then Axel dropped his ice spear and started to dance and then challenged the Costume to do its turn, the Costume danced and accidentally launched Courtney off its rear, Axel felt more challenged, changed his hat's position and danced with all of the eagles nearby.

When Glenn brought his grand hatchlings to the Regal Eagle and greeted him and Kira by saying wrong names, Axel said that his name was Axel and felt confused. 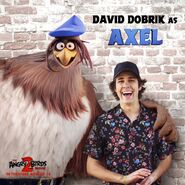 Axel and his voiced actor 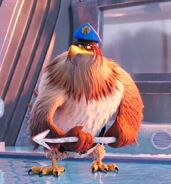 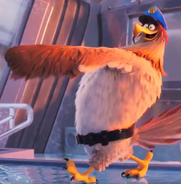 Retrieved from "https://angrybirds.fandom.com/wiki/Axel?oldid=275773"
Community content is available under CC-BY-SA unless otherwise noted.