Baby is a Dog in an ice block and pet Zeta's who appeared only in The Angry Birds Movie 2. He is a chihuahua, and he is the 5th Dog character to appear in the Angry Birds series.

He is a beige dog with a long body, black parts such as head and back, a tiny tail of the same color, a black snout, white mouth, chest, and feet and two big ears (Just like a Chihuahua). He is stuck in a transparent ice block. Zeta tries to give love to his pet, not noticing his problem to the inability to adapt to the local climate.

This poor doggy can't do most of the things that a normal dog does, such as eating. Zeta tries to feed him dog food with a spoon, but there's ice blocking his mouth and the Seal stealing the food. He also can't walk, as he has to be moved with a rope to move. It's unknown how he can survive, he has a love interest with a Seal and was later unfrozen after Eagle Island's Destruction, but froze after falling in the sea.

Baby appears on the Operation: Eagle Island Tournament as a rescuable animal that often appears on ice cubes. 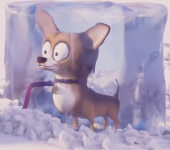 Retrieved from "https://angrybirds.fandom.com/wiki/Baby?oldid=235509"
Community content is available under CC-BY-SA unless otherwise noted.