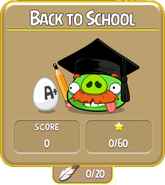 Back To School World

The book you get after completing the episode

The book you get after 3-staring the episode