Angry Birds: Bad Piggies' Egg Recipes, later known as Bad Piggies: Best Egg Recipes, is a book that collects the Bad Piggies' recipes for cooking eggs. Undoubtedly made by the pigs in hopes that one day they will successfully steal enough eggs to try their concoctions. It was later released on iPad as a book app on October 11, 2012. According to a comic, Chef Pig is the author of the book.

From the back cover

Be a pig for a day, no worries in the world, no Angry Birds trying to knock you down. The kitchen is your pigpen and life's good! So go 'head, crack an egg or two and fling your awesome self to new levels of egg-cellence with these easy and fuss-free (for the most part) recipes, addictively fun activities and impressive party moves. From the classics to off the wall, these top-secret egg recipes will fill your tummy and tickle your brain! 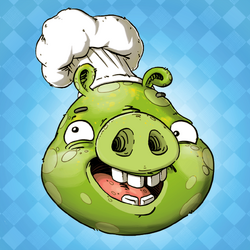 The book was also available on the App Store as an eBook. It is called Bad Piggies Best Egg Recipes. This eBook is only available for iPad. The animations now can act by touch them. It was later removed in 2015.