The Bad Piggies Cinematic Trailer is a trailer released by Rovio on September 27, 2012.

The Bad Piggies are on the edge of a cliff near a beach. Under the King Pig, they attempt to build vehicles capable of catching the faraway Eggs on a stone pillar in the ocean, only to fail multiple times, much to the dismay of the king.

The next contraption used spring and wings. However, the spring gets caught to the runway, retracting the vehicle. King Pig looks sad.

Then, they make a complex contraption with two wheels, wings, an umbrella, a tail, and a pair of fireworks (blue and red). The Bad Piggies have hope in this vehicle, especially for King Pig. But then, the umbrella makes the vehicle malfunction and made the King Pig cry at the last second. However, the fireworks attached work, and it flies out into the sky. King Pig happily sees that the contraption finally worked while Ross shouted, "Waaaaah-hoo-hoo-hoo-hee!". 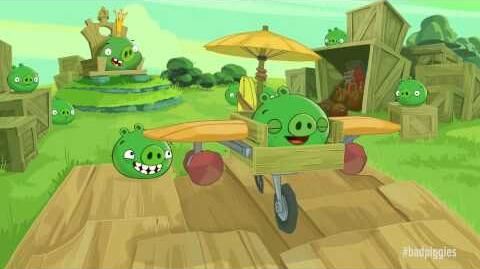 Retrieved from "https://angrybirds.fandom.com/wiki/Bad_Piggies_Cinematic_Trailer?oldid=285434"
Community content is available under CC-BY-SA unless otherwise noted.