Balloons are objects used by the Bad Piggies in Angry Birds to hold pigs and objects in midair. Once destroyed, the supported object or pig will drop.

Only in Angry Birds Rio and the Angry Birds episode, Birdday Party, if the player cuts the rope or stick holding the balloon, it will fly away.

Strangely, the balloons in Angry Birds doesn't have any ropes to tie with the objects but it still can hold objects and pigs in midair.

They are seen in the 2012 spin-off as usable items.

Balloons first appeared in the Angry Birds episode Danger Above, then later in Seasons and Rio. After that, it appears in Angry Birds Under Pigstruction with different shapes.

In Bad Piggies, red balloons are used as items for Ross to use. When attached to a wooden box (even when Ross is inside it), it will gain weight, not going up, even fast.

In Angry Birds 2, it's normal balloons but their length is almost long

In addition to appearing as objects in the game, balloons have been used by the Pigs to steal eggs in opening scenes or cutscenes. 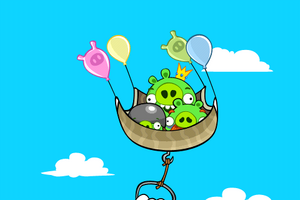 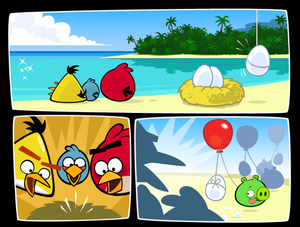 Ross on a red balloon (for Bad Piggies)
SpriteAtlasTexture-512x512-fmt13.png
in Angry Birds 2