Male
Balloon Pig is a pig that appears in the King Pig mode of Angry Birds Classic.

He is a pig shaped like a balloon with a pig's tail. The inflated form looks similar to the Fat Pig and has two spots on the head.

He is the rarest pig to be found in King Pig Mode, as most of the levels that the system automatically selects are the ones that don't contain Bubbles.  The ability of the Balloon Pig is to inflate like Bubbles. The Balloon Pig makes no other appearance than in King Pig mode. 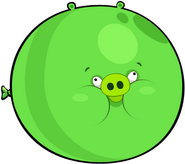