Template:Epic Infobox Level Beard Forest - 1 is the first optional level of Golden Fields in Angry Birds Epic. It is a normal stage. When this level is finished, the player may spin for 3 Seeds. Soldier Pigs are introduced here. Basically, they are stronger Stick Pigs.

The player has to engage 2 Soldier Pigs, 1 Pig Guard and 1 Big Boss. Each enemy's stats are shown below.

Choose Matilda in Cleric, and Red in Guardian, but in order to continue, read the sentence below: "Choose your friend's bird to help you in this battle! (0/1)". Press the button near the sentence. Then, press the SELECT button next to the Piggy Mc'Cool board to select him, hire a Facebook friend who is carrying that friend's bird on his/her board, or hire Mighty Eagle's Mercenary for 15

(Lucky coins). Use Matilda and Red's secondary skill when they have been expired. Then, attack every turn with the birds (and Piggy Mc'Cool) by attacking the Soldiers first, then the Guards, and finally, the Big Boss. Remember to drag the Rage Chili to Red when it is full. Repeat this until you win or lose. 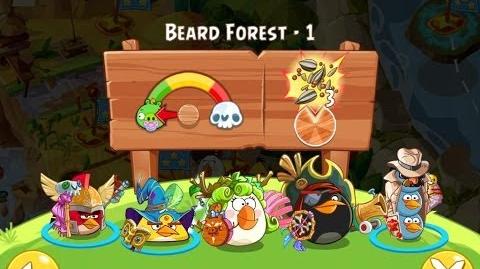 Retrieved from "https://angrybirds.fandom.com/wiki/Beard_Forest_-_1?oldid=260681"
Community content is available under CC-BY-SA unless otherwise noted.