"Make me fall and I'll make your whole world shake"
Hold onto me baby! (You don't want to see what happens if you don't)."

Not to be confused with Big Bork/Fat Pig.

Bonus Levels on the map; random

Causes an earthquake when he hits impact with any surface

Big Pig are a species of overweighed Pigs only found in Angry Birds Stella and Angry Birds POP Blast. ​Big Pig is a pig who has a fat body similar to Fat Pig. When moved, he causes a tremor that shakes up the board.

Big Pig makes his debut in this game as an enemy in the New Pigs on the Block update.

In Angry Birds POP Blast, Big Pig appears as a playable character in the game who can be unlocked from the piñatas. He is portrayed a lime large pig with sharp teeth and yellow eyes that acts like a dog. In the game he is playable and when his boost is active, he will attack any enemy nearby at random. He can be chosen along with any bird and uses an outlined cartoonish design. 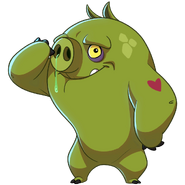