Humming Bird
Billy The Blitz is an Angry Birds Evolution bird that can be obtained at any time in the hatchery.

A one-bird demolition team, Billy the Blitz doesn't don a helmet for his own protection. It's for his own amusement!

Stay clear of the school gates on Fridays. Billy's usually overdone the gummy birds by that point and is on the lookout of moving targets.

He is a small yellow bird with a lighter belly, small wings, long curved orange beak, large eyes with orange irises and a tail with large leaf-shaped black feathers, there is a black facepaint line on the each of the cheeks. He waers a large round helmet, with cracks, two vertical yellow lines that lead to two horizontal lightning lines going to each side. There's also a green leaf on the left of it and two other ones on the right.

He is now grimacing and he has a long orange feather as hair. His helmet has now a brown belt to hold it, a yellow arrow painted with black outlines, a red star on the top with yellow outlines and the name Billy written yellow with black outlines on the left, Blitz on the right of the helmet and a black 12 number behind it. The helmet has also now a crack, showing the hair and a white flower pasted with a transparent tape into it.

He is still grimacing and there's a bandage on the beak. The helmet is now military swamp green with a yellow pig skull symbol with wings on the front, a brown belt on the center, Born too cute written on the right, yellow peace symbol behind the helmet, various green leaves and an orange one on the top.

He is now grimacing. His helmet has now black grease and is dark, a rocket tip with black and white race checkered line and red tip wore with a brown belt, a yellow rocket with a top fin, red wings and metal tips and bottom. He now wears a red aim monocle with a metal border.

He would grimace showing his teeth. 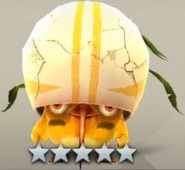 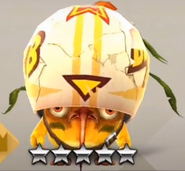 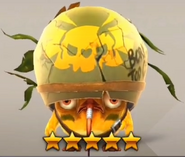 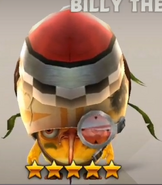 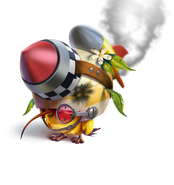