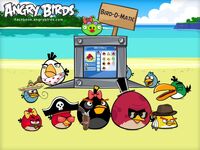 The Bird-O-Matic was a feature in Angry Birds Friends! for Facebook where you can pick a character to be your avatar and put accessories on them. these were removed in 2018 along with Story Mode.

the avatar creator was first implemented in Angry Birds Flash

In the game, it used to be accessed by clicking the ''Avatar'' button, then the first character chosen is Red but other characters could be chosen or bought with Bird Coins. (formerly real money) The characters are these, the ones that are bought with coins doesn't have the ''free'' information:

A background could be chosen, which could be one of those:

The player could customize their bird with accessories, which are for head, eye, beak and torso. It varies from tuxedos, hair to Zombie Pig pets. They cost coins. The player could modify his bird all him wants and after saving it, his avatar will be the bird with the accessories that will also appear on a tree in the starting screen and in the Story Mode menu.

early prototype of the avatar creator 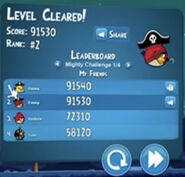