For information on the episode in Angry Birds see Bird Island (episode).

Bird Island is the original home of the flock. It is also the environment that they live in and is the main location. The exact location of Bird Island is in the Pacific Ocean, like Piggy Island and is confirmed to be on Earth. It first appeared in The Angry Birds Movie.

Unlike Piggy Island, this island has no monarch to rule it. It does, however, have a form of government. The head of state is unknown.

Unlike Piggy Island, Bird Island is a smaller, more natural island. Much of it is filled with dense plant life. Most of its namesake inhabitants live in a large village situated at its edge, where a beach is also nearby. There are also other birds who live in remote areas of the island (such as Edward, Eva and Timothy).

Birds are not the only animals living on this island, as it has been shown to be home to spiders, snakes, squirrels, fish,[1] and cows[2] as well. There are several mountains and rock formations at the center of the island, which are so difficult to traverse that it would take days to reach the tallest one.[1] A large, eagle-shaped formation contains the ancient cave of the Mighty Eagle, overlooking the Lake of Wisdom.

The island's biomes are prairies and rainforests, with some regions of jungles being mainly made of large trees with blue or red flowers, adding more color to it. Bird Island and Piggy Island are close to each other as both the birds and the pigs were able to sail for a short period of time to Piggy Island.

A long time before the events of The Angry Birds Movie, the first birds settled here. Over time, they grew and the island became more populated. The island was then civilized, with things like a daycare, a court, and other areas. On the highest point of the island, the legendary Mighty Eagle lives in his cave.

A pig named Leonard discovered the island, disembarking from The Porkchop Express, a naval vessel. She also held many other pigs. Eventually, three residents of the island, Red, Chuck, and Bomb grew suspicious on them and met with Mighty Eagle. The last day of the expedition marked the beginning of the Great Egg War. On the last day of their visit, the pigs threw a huge dance party and introduced the slingshot. Meanwhile, the other pigs began stealing the birds' offspring, in order to eat them. Various ground vehicles were driven on the island with TNT scattered across the land, and the Mighty Eagle Statue was destroyed. The eggs were stolen, then brought to Piggy Island. Eventually, dozens of birds then ventured to Piggy Island then fought in a violent battle, and retrieving most of their eggs. However, the pigs had more plans to steal the eggs, causing the war to escalate.[1]

The war continued throughout the years as Bird Village began to modernize, but the conflict ended in a truce when the rogue eagle Zeta, from Eagle Island, declares war on both the Birds and Pigs with a powerful superweapon. For several days, the island falls under attack from the weapon, which razes its various landmarks and large chunks of the village, before Red and Leonard, having forged a truce, assembled a strike team to embark on a mission to disable the weapon. Following the success of that mission, Leonard commissioned drones to carve out the faces of the strike team members on the island's mountains to celebrate the job well done, while Mighty Eagle marries Zeta in a festive wedding at the island's beach, while finally getting to know his lost daughter, Debbie.[2]

"And now, we've come to the prestigious Palm District, where birds of all feathers flock together for eight kinds of fruit and nut trees."
— Stella, The Angry Birds Movie Palm District is an area on Bird Island.

Palm District is a lush area of Bird Island where palm trees thrive with tasty fruits and nuts for Birds to eat.

After the Pigs arrived on Birds Island, Red, Chuck, Bomb and Terrence came to Palm District one day under Matilda's direction for a session of "Paint Your Pain", part of the anger management curriculum that they are required to take as part of their sentence for their criminal, angry behavior.

During the session, Stella happened to be nearby, leading a tour of the island for a group Pigs, which included Leonard, Photog and Earl. It is where Leonard first notices an Egg and begins having fantasies about what he could do with it, such as having a picnic, hugging it and jumping in front of a rainbow, rolling in grass and watching clouds, which a large heart-shaped cloud devours a smaller cloud, eventually foreshadowing the Pigs' plot to steal the Birds' eggs.

Bird Island is known to have a large beach.

This unidentified beach is spacious enough for recreational activity, while also serving as a natural port of entry to the island. Behind this beach lies one terminus of Main Street, as well as the Mighty Eagle Statue. At a far-off corner of the beach lies Red's house, before it was relocated deeper into the village not long after the Great Egg War began. It is unknown if it is the only beach on the island.

During the Great Egg War, a transit slingshot was constructed at the beach to allow anyone to quickly leap back into the village. This would be the terminus of the Blue Line slingshot route, which can be taken out of service and used as a battle turret if the threat of Pigs is nearby.

This beach was a calm and peaceful part of the island, suitable for recreation, but saw its share of turmoil in the days leading up to the arrival of the Pigs. Red, the region's only known inhabitant, sought to live here apart from the village and went to great lengths to carve out his peaceful, private life, even if it meant kicking a young bird who was bothering him with his desire to play soccer into the water nearby.

While Red was serving his sentence for getting too angry, the Pigs arrived at the island aboard their capital ship, The Porkchop Express, landing at the beach as a port of entry. Their arrival drew the attention of the entire flock, but Red is devastated to see the Express dropping her anchor right upon his house, smashing a good chunk out of it. The Pigs then established the first contact with the birds at the beach, before engaging in festivities celebrating their welcome and arrival deeper in the mainland.

During these festivities, when the Slingshot was demonstrated, Red was hurled onto the beach, where he discovered an opportunity to investigate the Express, calling his friends Chuck and Bomb to join him, and the three together discovered suspicious things aboard her. The Pigs also began setting up umbrella ziplines at the beach in preparation for their grand scheme to steal the Birds' eggs and made good on their plans not long after. Red and Bomb's attempts to stop the Pigs as they escaped with the eggs ended in vain, as the Pigs catapulted the Mighty Eagle statue right onto them, almost hitting them.

The day after the raid, the flock congregated on the beach where the pigs departed to reflect on the Pigs' evil deed and come up with a plan for a counterattack, then initiated it by launching a makeshift raft made out of TNT crates to reach Piggy Island.

After the battle, Red's house, which was once on the shorelines, was relocated deeper into the village. As the war between the birds and pigs continued, the village expanded and a slingshot transit network was established to provide rapid access to every area, with one of such transit slingshots installed at the beach to provide a quick exit back into further parts of the village. Red, Chuck, and Bomb would dutifully patrol this beach during this time, watching for any attacks from the Pigs. There, they later engaged the Pigs in a Prank War, putting the transit slingshot out of service and using it as a turret to counter the Pigs' long-distance prank attacks coming straight from their own shorelines.

After the battle ended in an emergency truce, Leonard traveled to Bird Island and began assembling a Bird-Pig strike team to confront Zeta and her superweapon. After the team was completed and a plan of attack was put together, he led the squad back to the beach and called up his submarine to begin the mission, which would take them to Eagle Island to disable the weapon. After the mission's success, the strike team returned with a reconciled Zeta and her eagles and held a wedding on the beach between Mighty Eagle and Zeta, with many Birds and Pigs in attendance. 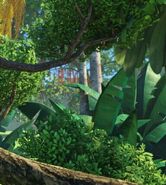