For information on the main setting in Angry Birds Movie, see Bird Island.

Bird Island is the twelfth episode in Angry Birds. It was made to advertise The Angry Birds Movie. It has 21 levels, and Mighty League tickets were hidden all over the levels, though these were replaced with Shockwaves after the Mighty League Ticket mechanic was removed. Finishing the episode will reward you with a sand sculpture of the Mighty Eagle. The episode launched on November 10, but you had to wait until November 17 to play the levels.

Collecting all Shockwaves from the levels will award you a special sticker for Mighty League. 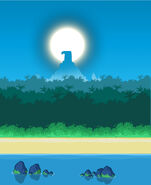