Birds
Bird Village (Or Bird Town) is a village (town in Angry Birds Evolution ) seen in the Angry Birds universe.

Many of the village's major landmarks, which are naturally crafted and constructed from plant-based materials (such as wood and straw), are linked by a major, arterial footpath. Various public services are offered at the village, which is bustling with activity on any given, typical day.

However, the Birds did not continue their simple, primitive way of life indefinitely. Years after the Battle of Pig City, the village's inhabitants have adopted modern technology. The village also expanded by that time and also utilized slingshots to form a rapid transit system that quickly propels Birds from one place to another.

On Angry Birds Evolution, Bird Village is called Bird Town and has a more modern building design, with buildings and roofed houses, even having internet, light and electricity poles.

The following landmarks, listed in approximate geographic order, are easily accessed from Main Street, as well as descriptions of these buildings.

There are other buildings and locations in the village whose precise location is not known.

Early Bird Worms and Late Riser Worms in the comic. 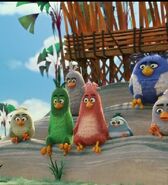 Bird Court's inside part in the movie.

Birds of a Feather Salon.

Daycare Teacher teaching the Eggs about Mighty Eagle in the Daycare.

Edward, Eva, Timothy, and Dylan's House.
Add a photo to this gallery

Add a photo to this gallery
Retrieved from "https://angrybirds.fandom.com/wiki/Bird_Village?oldid=240726"
Community content is available under CC-BY-SA unless otherwise noted.