It takes place in a fantasy world filled with candy, birthday cakes, and other sweets, as opposed to the realistic environments seen in previous episodes.

HAPPY BIRDDAY TO YOU!
It was Chuck's clever idea. Taking a leaf out of the hog's book, the Flock disguised the eggs as a birthday cake. What a half-baked plan, birdbrain. Dressing the nest up as food? It just made King Pig hungrier than ever.

The episode itself serves as the eighteenth, nineteenth, and twentieth themes of the original game, and marks the 300th level mark with Cake 2 Level 15.

Formerly, this episode was considered the seventh of the game. However, it no longer uses the regular world numbering, instead opting for cakes with n numbers on top. Surf and Turf is now what continues from Mine and Dine, and Bad Piggies continues from that. 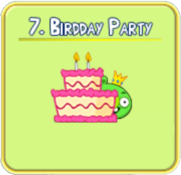 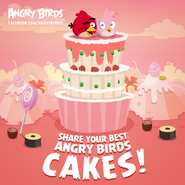 The Rainbow cake you get after completing the episode