Launch the White bird as low as possible, but still clearing the balloons to detonate the TNT on the left. The stones and bird should launch into the main structure, pushing it to the right. Loft the next White bird over the structure and bomb to the right of the next-to-last vertical support — directly above the last pig. Use the first Yellow bird horizontally, just above the pillar, to clear all pigs in the interior. Use the final Yellow bird as necessary. 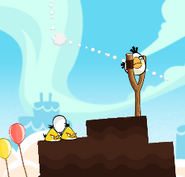 Egg bomb glitch.
Add a photo to this gallery
Retrieved from "https://angrybirds.fandom.com/wiki/Birdday_Party_18-3?oldid=230003"
Community content is available under CC-BY-SA unless otherwise noted.