Launch the first White bird just above the first TNT, dropping the bomb next to the TNT and having the bird ricochet into the top-left structure. In the walkthrough video, after all debris settles, only three pigs remain: bottom-left, dead center, and top-right. Being mindful to avoid the balloon, use the next White bird to bomb the bottom-left structure. Then use the Black bird to attack the middle structure, and a high-arcing shot for the last pig in the top-right.

This strategy is not easy. First, launch the White Bird just over the first pink balloon (counting from left to right). Make sure that the balloon has been blowed to the left. Bomb the egg next to it and she'll ricochet to the top left structure while the egg will be bombed on the Helmet Pig. There is a TNT there. If you've bombed correctly, the White Bird should ricochet right to the TNT and this should fire the three stones next to the TNT to the structure next to this structure. If you're lucky, the stones and the TNT there will fall into the three structures at the right and pop the pigs there. Replay the level if not, or you have to destroy them at the next shot. Then, there will be 3 to 5 pigs remaining left. Before you catapult the next bird, make sure that the pink balloon has been flied away and completely gone in the sky. If the Helmet Pig has been popped, catapult the second White Bird to a boulder at the structure which is having two stone boulders and hit it (do not bomb anything). If the Helmet Pig is not popped yet, repeat the first shot, but lower to make sure after she bomb the Helmet Pig, she'll ricochet to the boulders. Make sure that you hit it hard enough so the boulders and TNT will fall into the two remaining structures. This should clear the level with two birds. The first shot is very important and the second shot is really hard so practice before you do this. If there are any pigs remaining, just use the Black Bird to clear the level. 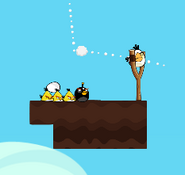 Egg bomb glitch.
Add a photo to this gallery
Retrieved from "https://angrybirds.fandom.com/wiki/Birdday_Party_18-5?oldid=236873"
Community content is available under CC-BY-SA unless otherwise noted.