Birds are the protagonists of the Angry Birds series, and come in varieties of different species and sizes. Their main goal is to retrieve the eggs that their enemies, the Bad Piggies, have stolen. Ever since they were first stolen, they have tried numerous attempts to get them back; even killing pigs. They hurl themselves using a Slingshot at the various buildings and fortresses the Pigs made. There are 9 playable birds in Angry Birds Classic, 9 in Seasons, 10 in Rio, 7 playable birds and 1 egg in Space, & 7 birds from Angry Birds Star Wars and 1 egg. When a level is completed with unused birds, the player is awarded with 10,000 points for each unused bird, regardless of type. This increases the chance of getting 3 stars in a level. Both Bird Island and Piggy Island are based on islands in the Pacific Ocean.[1] 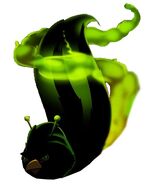 Angry Birds and the Slingshot (minus the Pink Bird)

Retrieved from "https://angrybirds.fandom.com/wiki/Birds?oldid=229551"
Community content is available under CC-BY-SA unless otherwise noted.