This article is about the Halloween version. For the normal version, see Byron

Black Metal Byron is a bird in Angry Birds Evolution  that can be obtained at events, such as the Iron Maiden Event , his debuting event.

Byron was never quite the philanthropist - but on Halloween, the like-minded joins his cause.

He is the normal Byron , but his belly has black parts that resemble a skull, there are two black lines on the forehead, his irises are black, his beak is gray with lines and he has black eyebags.

There are now more white feathers that resemble spikes on the face, his eyes are totally red, his eyebrows are larger,  there are white black feathers on the belly resembling an angry crying skull, there are more collar feathers and there is some blood drippng from his face.

It the same as his normal version evolution but He has now long fancy hair, his eyebrows are larger, there is blood coming out of his eyes, there are red feathers on his belly resembling a skull with blood eyes and blood dripping from it, two piercing on the skull's nostrils and much more feathers on his body.

He now wears a dark blue shirt with the word DEATH written on it and dark blue jacket with spikes on the shoulders.

It the same as his normal version evolution but the armor is silver and bronze and the belly has now yellow lights resembling a scary monster face, mostly a Halloween Pumpkin. The cape is now dark blue.

Cause an explosion, dealing 322 damage to any enemy in range and uprading all affected power ups.

Cause an explosion, dealing 1026 damage to any enemy in range and uprading all affected power ups.

Cause an explosion, dealing 1254 damage to any enemy in range and uprading all affected power ups.

Cause a wide ranging explosion, dealing 1183 damage to any enemy in range and uprading all affected power ups.

Increases the crit chance by 15%.

As his rarity is good, he is very strong. Evolving him with the right evolution will make him stronger. Totems  and Runes  can also help. 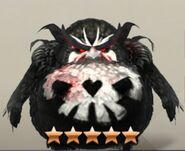 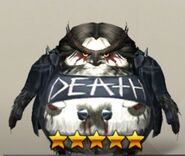 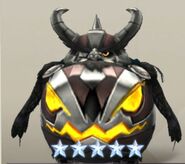 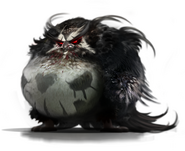 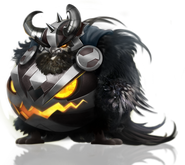 Wide Upgrading Bomb Icon.
Add a photo to this gallery

Retrieved from "https://angrybirds.fandom.com/wiki/Black_Metal_Byron?oldid=256778"
Community content is available under CC-BY-SA unless otherwise noted.