He is Bomb but he has gray beard strands below his beak. He wears a brown hope and beige kimono.

He is Bomb in his Toon Design, but with a long blonde fancy hair and blonde beard. He wears a beige kimono with a brown belt with a silver buckle and a brown pocket where there's a lightsaber near.

According to the Angry Birds Star Wars Character Encyclopedia, his official name is Obi-Wan Kaboomi. He still apparently has the ability to explode, as also seen in the cinematic trailer. Like Bomb, he cannot always control his temper. He is a Jedi Warrior and later teacher, determined to protect The Egg at all costs. He trained Redkin Skywalker and Red Skywalker in the force. He knows a lot about the force, and even can apparently use his eyebrows to deflect small objects. A Jedi follows the path of peace, but he secretly enjoys blasting things. His home planet is Coruscant and his allies are Chuck "Ham" Solo and Red Skywalker.

He is first unlocked in Tatooine 1-5. Unlike

his appearances in other games, Bomb uses the force, where he will launch a blue light wave that pushes and pigs objects away with a bit of strength. Also unlike his normal counterpart, he can't destroy objects well, destroying just some materials when not stunned. He can also activate his ability a bit after he is injured.

In Death Star 2-26, he receives an upgrade that allows him to push objects with much more strength, and he gains a bit of body strength.

He is unlocked normally when first playing level B1-4 of Naboo Invasion. He mantains the same power from the first game, but he is noticeably much more strong, but only for ability, because he can only destroy small cubes of materials by impact.

His force power can now push things to a longer distance, but unlike the first game, he has absolutely no upgrade. He can also be bought with coins:

He also appears as a boss, first in level P3-20 of the Pork Side of Battle of Naboo.

His ability is to use the force to repel objects or pigs that reach him, letting only a bit of damage, he also makes objects levitate just like Yoda in Angry Birds Star Wars. His resistance is medium.

He then reappears as a minor boss to every level of the Pork Side of Rise of the Clones, being very weak as most of the things can defeat him. His last appearance as a boss is in level P5-16 of Revenge of the Pork, holding a lightsaber. Just like any boss that uses lightsabers, he will attack anything that reaches him, his resistance is the same. 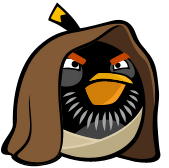 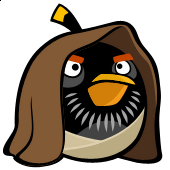 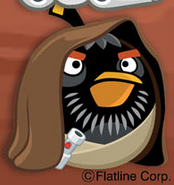 Qui-Gon Jinn when thrown out of the Slingshot 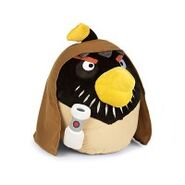 Young in the movie.

In the movie.
Community content is available under CC-BY-SA unless otherwise noted.
Advertisement