Space Bomb (also known as Firebomb) is a transformation which appears in the Angry Birds series. It is an alternate state of Bomb, achieved by passing through a wormhole.

In Angry Birds Space, Space Bomb makes his debut as a transformation that replaces the normal Bomb. At the start of the events of the game, Bomb assumed this state by passing through an extraterrestrial wormhole he used to go to space.

In gameplay, Space Bomb is a playable character that first appears in the fourteenth level of Pig Bang. He would later appear in the next episodes and the Mirror World levels. Space Bomb has the same basic ability as the regular Bomb. However, his ability is much more fiery, emitting a ring of fire around his body when he explodes. His ability is commonly used to cause debris to fly off into structures, such as stacks of stone bricks or boulders floating in space. If the player slings Bomb very weakly into zero-gravity, then he will slowly decrease in speed, stop, and disintegrate without exploding. This is the first time that Bomb is the third bird introduced, rather than the fourth. He swaps places with Chuck.

In Angry Birds POP Blast, Space Bomb is a character that appears in the Space Race. 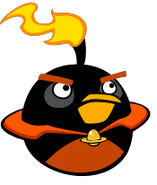 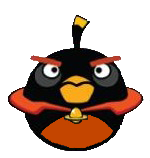 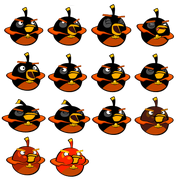 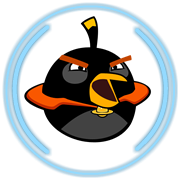 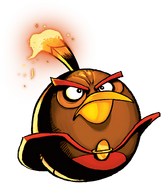 In the cover for Angry Birds: Hatching a Universe 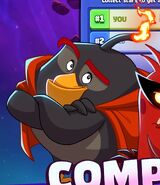 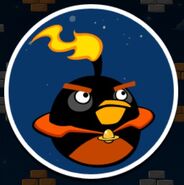 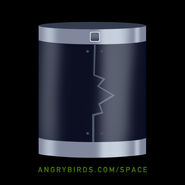 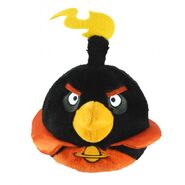