The Boombox, from Angry Birds Reloaded.

The Boombox is an altered version of a TNT except it can fly and carefully land on materials and pigs.

The Boombox makes its first appearance as a power-up in Angry Birds Friends. It can be obtained by buying it at the shop, by getting rewards, or by watching an ad.

When using the Boombox, it goes at the front of the bird which was on the slingshot before it. When it's launched, the player has 2 options, wait for it to land or make it fly to make it more careful.

The costs of the Boombox at the shop are the following:

In Angry Birds Reloaded, the Boombox returns as a power-up, with the same features as in Angry Birds Friends. Its costs at the shop are the follows: 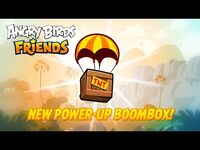