For the bird, see Bubbles.

Bubbles are Items first introduced in Angry Birds Space and when Stella uses her ability to blow them. Most of the time, a pig is usually inside the bubble, used for the main purpose so that the pigs can breathe in space, much like an Astronaut Pig's helmet. Lights can be usually found in the bubbles, like in level 3-10 from Angry Birds Space.

As mentioned above, the Pigs use the bubbles mainly for breathing in space but are also used to float around. If a bubble is destroyed and the pig is not in an atmosphere, the pig will freeze. The frozen pig will then explode after a few seconds if immobile. If, however, the bubble is popped in an atmosphere, the pig will not freeze, but will most likely pop from the planet's gravity by hitting the planet too hard. They are in AB Star Wars, too.

A Foreman Pig in a Bubble. 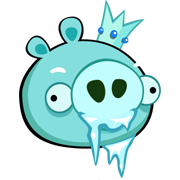 Retrieved from "https://angrybirds.fandom.com/wiki/Bubbles_(object)?oldid=250149"
Community content is available under CC-BY-SA unless otherwise noted.