This the article for his normal version, for his Halloween Version, see Black Metal Byron.

Byron is a bird in Angry Birds Evolution that can be obtained regularly in the hatchery.

Byron is a bold breasted bird with a love for angry opera.

Favorite opera: The Marriage of Feathero

He is based off Mosart a bit. He is a fat  large black bird with a large white belly, white face that is moustache shaped with bushy dark long eyebrows that cover the eyes a bit, brown irises, black circles around the eyes, a hexagon-shaped orange sharp beak with a white spot below and a bushy and long black tail. He also has a large black wings with various feathers and dark gray feet.

There are black spots near the wings and white spots above and below the face, making the mask spot a gradient.

His belly is now gray and with black feathers, the eyebrows are long   and there are two black feathers on the cheeks and below each eyes, he has a bushy black feather collar that extends to the back and has long feathers for each side. His head is now more tilted to the front, giving an angry expression, along with the fact that he is now angry and his beak is now showing perfect teeth.

Based on Punk culture, he now has a raspberry pink mohican, the eyebrows are now pink and there is black eye face paint with various sharp parts. He now wears a white tanktop with Bubba written on it and a Golden Red button and a silver sharp piercing on the belly.

Based on Odin , he wears a golden viking helmet with long bull horns with lines, a golden eye patch on the left eye and a blue armour  with a golden arrow shaped middle with parts that are shaped like lightning rays.

He already had the features of his current evolution and a long horsetail-like feather hair.

Cause an explosion, dealing 322 damage to any enemy in range and uprading all affected power ups.

Cause an explosion, dealing 1242 damage to any enemy in range and uprading all affected power ups.

Cause an explosion, dealing 1882 damage to any enemy in range and uprading all affected power ups.

Cause a wide ranging explosion, dealing 1774 damage to any enemy in range and uprading all affected power ups.

Damage against obstacles increased by 40% 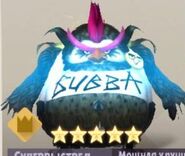 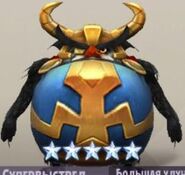 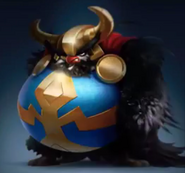 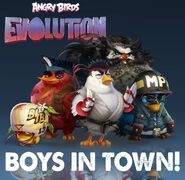