Matilda appears in Angry Birds Star Wars, taking on the role of "C-3PO". Although Matilda's character is technically female, she is considered male in this game. Canonically, his name is "C-3PYOLK", which is a pun on the word "yolk" and the name "C-3PO".

In the storyline of Star Wars, which the game is based on, C-3PO is bought by Luke, along with R2-D2. (after they escape the Dark Side troops and are kidnapped by Jawas) After this event, they do play a part in the cutscenes, but both C-3PO and R2-D2 are not playable characters in the story episodes.

This is the first game where Matilda's ability is different. She no longer has the egg-bomb ability, but rather the ability to split into 5 different pieces. While these pieces do have the potential to do a lot of damage, they spread too far apart from each other and not every piece will likely manage to hit an object.

For the player to use the character as best as possible, it's better to make sure that C-3PO is surrounded by as many bricks as possible, and releasing his ability once he is. His ability shouldn't be launched from far distances, as once the pieces lose their speed, they will no longer be as powerful.

C-3PO's ability takes a lot of strategies, just as the original Matilda. If used right, he can do much damage. It can also be noted that unlike the other Angry Birds games, all characters can use their ability even after they hit a structure. (however, this feature will only be available for quite literally only a split second to a second)

Each piece, if having good speed, will be able to destroy all the materials, from glass, wood, and stone. (in the first contact)

Silver C-3PO is slightly different. In his ability, he will split into 4, rather than 6, pieces that of course, will be much bigger and denser, making them much better at destroying materials and structures. However, the original is much more versatile, so it depends on the player's choice. If the player wants something more destructive for point value or just to beat the level, then the silver version is preferred. If the player, however, wants to hit multiple targets at the same time, then the original may be more preferable. 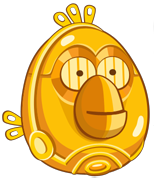 C-3PO about to be launced. 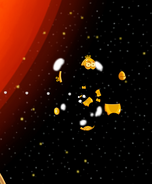 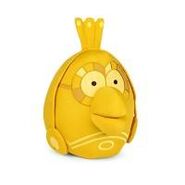