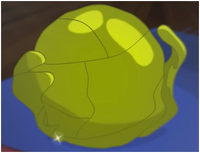 Cabbage is a vegetable that pigs love to eat, they are mainly found in Angry Birds Toons and is a main element of it.

Just like in real life, cabbage is a dark green vegetable with various leaves that make it.

In Angry Birds Toons, it's a food that the pigs love to eat and is a symbolism of them, it appears in most of the episodes and mainly ones that have pigs on them. In Last Tree Standing, King Pig used it as a volleyball, while he eats it in some episodes. The cabbages are also grown by the Pigs in the  farm, Matilda also grows them on her garden.

It's also used in the training course outside the gates of Pig City, the cabbages were thrown at signs depicting Red, Jay, or Chuck. The cabbage were thrown by a catapult, under the direction of Corporal Pig, and done by a Minion Pig.

As a Queen Pig

King Pig was in a tower making a doll and an action figure kiss, when suddenly the cabbage, thrown by the catapult - hit his head with a great impact, it made him hallucinate that it was a Queen Pig. He was then lovestruck, and started

dancing with it. Corporal Pig witnessed the scene, and said ''Uh-oh''.

He then began courting the cabbage and eating with it (but not eating it). His servants started mocking him for being so obsessed with it.

One day, he and the cabbage went out on a gondola and started boating around the city, but then suddenly, he presented a ring to the cabbage, and then the pigs went emotional after realizing he truly loved it. Eventually, the pigs began to accept the cabbage as consort. A few days later in a church, he married the cabbage in the presence of some Minion Pigs, Corporal Pig, and multiple other vegetables. They were wed by Chronicler Pig. Shortly after, a great feast was held outdoors, with pigs partying and celebrating the newlyweds. During the first dance, Corporal Pig opened a bottle, with the cork hitting King Pig and rendering him sane. He then ate the cabbage and its bridal vestments, and pigs were shocked, some crying, and the Chronicler Pig fainting. Chopin's Funeral March started playing, and the Corporal Pig was joyful. However, King Pig fell in love with him instead, starting to kiss him, which is heard over the credits, much to his disgust.