Cake Race is a mode in Bad Piggies that consists of obtaining cakes and gaining points, resulting in the reward of Loot Crate.

The Cake Race is unlocked at Experience Level 5. Upon clicking the Find Opponent button, the player will start at a random level, with 5 cakes scattered. The player has to build a vehicle that can catch these 5  cakes or a number of them that score a higher score than the opponent's, whatever, obtaining 5 cakes is a good way to obtain points.

After the player finishes the level, Foreman Pig will blow his whistle and will show who won, giving a Loot Crate. The more the player has points than the opponent, the better the Loot Crate will be

Every day, King Pig will want a specific custom part, which will increase the player's score by +20% if the player uses it in the level. Gaining a determined number of points will make the player reach the Leaderboard, however, the player won't be declassified by any chance. These are the cups, in which the player advances by leveling-up and the rewards get bigger:

It plays when the player first press its button, it's the following:

A bunch of pigs is waiting in a line to the Cake Race and Ross is excited. Corporal Pig and a Minion Pig start to race. Corporal Pig catches a cake with a net and the minion pig's time clock explodes, resulting in the cheer of the audience. 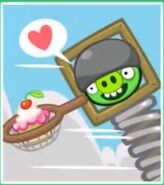 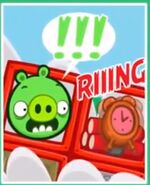 This notification warns the player about new Cake Race Tracks:

Pedal to the metal!

Retrieved from "https://angrybirds.fandom.com/wiki/Cake_Race?oldid=285433"
Community content is available under CC-BY-SA unless otherwise noted.