Capt'n Thrush is an Angry Birds Evolution bird that can be obtained regularly in the Hatchery.

Batten down the hatches, raise the mast, and plug all bung holes when Cap't Thrush is on board!

When he isn’t capturing landlubber postal workers and making them walk the plank, Cap't Thrush can be found enjoying a game of "Blue Canary" on the poop deck.

He is a bulky white bird with large wings, orange beak with a larger jaw, small eyes with brown irises and black eyebrows above them, a large beard below the face with some feathers with black tips, an orange left talon and a wooden leg. He also has a large white tail with black tips.

He wears a black sailor hat with a yellow line and an anchor. He also has the tattoo of an anchor on his right-wing.

There are now black stripes on the torso which resemble a shirt, more feathers with black tip, more tail feathers and the tattoo is different. The hat is now white and with a golden Red symbol on it and he wears a black eyepatch. 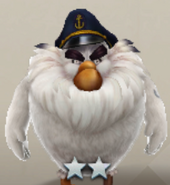 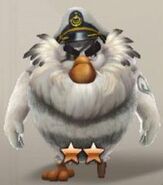 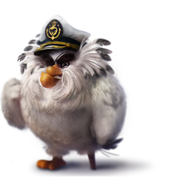