This article is about his normal version, for his elite version, see Elite Major Freedom

Captain Freedom is a bird in Angry Birds Evolution  that can be obtained at events, such as the Fourth of July , his debuting event.

The Captain currently holds the title belt for undisputed heavyweight champion of bird wrestling, a popular sport “across the seas”. Every inch of this magnificent avian oozes with patriotic and courage and wherever he goes, thousands of fans follow!

He is based off Hogan Hulk Hogan, he is a large trapezoidal white eagle with a strong build, large strong white wings, a orangish yellow curved beak with a blonde moustache, blonde long hair, two long talons and a blonde tail with various feathers. The head has more hair than the body, these attributes are similar to Mighty Eagle.

He wears a United States flag band on his head, two golden bracelets, a yellow underwear and a large  golden wrestler ring with two symbols of a planet and a cog with an egg detail.

He now wears a large United States of America flag as a cape, blue cloth bracelets with stars from the flag, blue anklets on the talons and the Golden Ring has now only a large detail with the symbol of a golden classic Red on the white and red stripes of the flag.

In Angry Birds Friends!, he is classic, fat and doesn't wear a ring nor an underwear.

Master Of The Universe

He now wears metal robot arms and hands, an iron armour in the form of a peach and with two nlack belts held by a metal shoulder pad, a metal underwear and metal anklet. The bandanna on the head is now a black belt with a white hat and the ring is a cloth part.

As a Marine Corps Drill Instructor, he now wears a light brown coat with two pockets, flag medals, a black detail above the right pocket and a dark green belt with a golden buckle that has the symbol of Hal. He also wears a dark green underwear, two swamp green bracelets, dark green square sunglasses and grayish brown hat.

Roll out a spiky carpet that deals 800 damage to any enemy in its path.

Roll out a spiky carpet that deals 1702 damage to any enemy in its path.

Master Of The Universe Evolution Rank 1

Roll out a spiky carpet that deals 2665 damage to any enemy in its path.

Roll out a spiky carpet that deals 2665 damage to any enemy in its path.

increases both health and damage by 10%!

The income of White Evolution Material and Coins when selling him varies according to his level.

He appeared in the two weeks of the Join The Evolution Tournament, where he would hatch from a Common Egg after a bird hit it. He would then appear next to the slingshot but wasn't playable. He would hatch in all levels, along with Darlene.

He appeared in The Fourth Of July Spell Event days, where it was possible to launch his pies off the slingshot on the first day,  then his fries on the next day and then his juice on the last one. 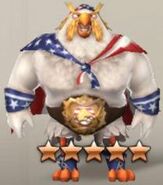 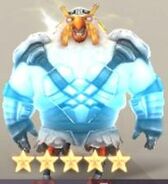 Master Of The Universe Evolution. 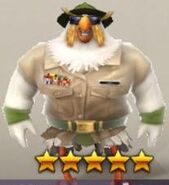