Carl is an eagle who works for Zeta. He only appeared in The Angry Birds Movie 2. He is voiced by Zach Woods.

He is a tall skinny pink golden eagle, with a curved orange beak with a red spot, white belly, pink tail feathers, purple wings, and orange claws. He wears a dark blue Eagle Island security hat and a black utility belt with a golden buckle.

He is serious about his work, often getting angry with his best friend, Jerry, because of something he did, like trying to eat fish during duty due to his breakfast being small. He is a lot suspicious of who wants to enter the Eagle Island base. He also hates when he sips hot chocolate and his brain freezes.

He then danced with the other eagles on the breakdance battle.

Being watched by Red. 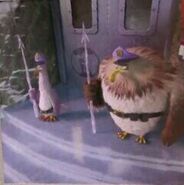