Polish Rooster (Gallus Gallus Domesticus)
Carson is an Angry Birds Evolution bird that can be obtained at any time in the hatchery and with a different rarity during events.

This bird likes to rock out... and he's not adverse to twanging a roadie or three either!

Criticize his riffs and he'll use you as a rehearsal towel!

He is a strong grayish black rooster with large feathery wings, an orangeish yellow beak with a large top part that is angry with perfect teeth, a red shiny comb below it, bushy black eyebrows that are together, large eyes with yellow irises that have small pupils, black chest feathers, long orangeish yellow talons, white hair with various large feathers which is black in the left and a black tail with various feathers.

He wears a dark gray jacket with silver lines around it and a white ''MF'' symbol with a circle around it, black bracelets with silver thorns on the arms and a red headband with a white triangle and dot pattern that holds the hair.

Based on Gene Simmons, he is now angry, his eyes are almost closed, there's white star-shaped facepaint with a line around it, his hair is bigger with more feathers pulling to the back and his beak is now painted white with a red tip. He now wears black spandex tanktop pants with silver thorns on the bottom of each side and shoulder pads also with thorns, the bracelets are now bigger and with extra rows of thorns and his headband has only dots and no more triangles as a pattern.

As a Shifu, his beak has now red vertical lines on the moth, he has white long moustache and a beard on the bottom of the beak, his hair is now round and there's feathers as a bun with a red rubber tying it and his eyebrows are now bushier and with sharp tips. He now wears a dark gray kimono with a fluffy collar that is separated by a thorn, there's the ''MF'' symbol on the right of the chest, a gray line on the middle, a red belt with gray protectors that have brown ribbons and it has same type of protectors on the shoulders near shoulder pads.

He also wears a metal black armour below the kimono with dots, red fingerless gloves and white bands on the wings.

As a Robot, he is beak has now red lines around the mouth and he now wears a gray cardboard box with black arrow paint with white borders around the eyes, brown light glass eyes with black eyebrows painted above them, black and white arrow on the head with a yellow glowing incandescent light bulb, the phrase ''Box of Shame'' written on the back of it and the headband is tied squareish around the box.

He also wears a gray cardboard square chestplate with two square flat plats on the bottm, black ''MF'' symbol, yellow square with black outlines and a lightning bolt electricity symbol on the middle, white, red and white police bar badge above it and a bandage on the left. The above part is flattened and held by bars that led into a flat back part.

There's also shoulder boxes that have rolling balls and flat pads on the hands with thorns.

His hair would be smoother and round with a bun that is tied with a band. He still wears the yellow headband and his legs have red bands.

Create a mosh pit at the target location, dealing 327 damage to each enemy inside. Fans inside join the attack for additional damage.

Create a mosh pit at the target location, dealing 1057 damage to each enemy inside. Fans inside join the attack for additional damage.

Create a mosh pit at the target location, dealing 1199 damage to each enemy inside. Fans inside join the attack for additional heavy damage.

Create a massive mosh pit at the target location, dealing 1199 damage to each enemy inside. Fans inside join the attack for additional damage.

The bird's fame attracts fans. Hitting a fan increases a bird's damage by 10% times the ammount of present rockstars for the turn.

Increases the effectiveness of all power-ups collected by 30%! 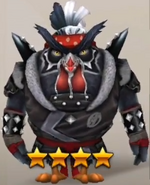 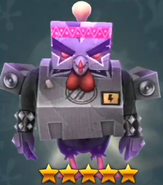 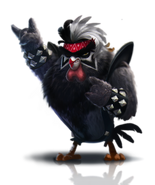 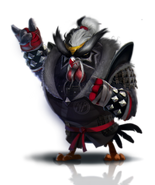 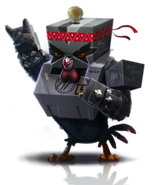