Catch the Hatchlings is an AR web app game developed by Zappar and published by Rovio Entertainment which is apart of the Sonic Drive-In Angry Birds Summer Madness collaboration. [1]

The code for the game comes with any of the 4 Summer Madness Hatchling toys in a "Sonic Wacky Pack". [2]

It plays identically to the Whack-a-Pig minigame from Action! & Explore, only with the hatchlings instead of the pigs. [1]

The player has to hit the hatchlings and avoid hitting the birds to earn stars before time runs out similarly to Whack-a-Moe. If the player hits a bird then the player will lose five seconds. 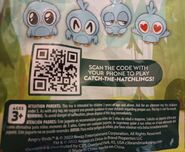