''Another culinary masterpiece! Just need a touch of paprika, a bit of garnish and... Here you are, my king.''

Chef Pig is an antagonist in the Angry Birds series. He appears in Angry Birds Toons, first appearing in True Blue? In this cartoon series, he has a thin black mustache like in the comics. In the Toons episode Trojan Egg and Angry Birds Epic, it is shown that he has a desire to be the King, and is willing to even take over the King Pig for the castle for the crown. He is always an antagonist and has served as King Pig's chef until the events of Bake On!, where he is replaced by a Minion Pig.

His first appearance in apps was in the v 1.3.0 update of Bad Piggies, where he makes a cameo appearance as a silhouette carrying a chocolate cake in the episode Rise and Swine. Other things he was shown include the images in Angry Birds Birdsonality.

The Chef Pig is a level-headed observer; Calm, Collected, Observant and Analytical. He takes action to solve even the most complex problems at hand. He gets frustrated with rigid rules and routines and prefers to be in charge of his own time so that he can work independently on projects he finds interesting and challenging. The Chef Pig is an excellent cook, preparing delicious foods and delicacies to feed the pigs, especially King Pig. Despite being the top chef in Pig City, he also conducts scientific inventions and experiments, almost like the Professor Pig.

He is a peach-shaped pig with 3 dark green spots on his head, light green snout, and a long black French mustache. He also wears a Chef's Hat which is long and white. He also has blue shading under his eyes

He is a short pig that is stone shaped, the mustache is dark green and he wears a white apron with the Pirate Pigs' symbol on it.

He is the same as his movie design but he is larger and wears a coat instead of an apron that has a snout on the right.

In the game, Chef Pig appears in cutscenes of some episodes but mainly appears in the Feed King Pig mode.

In the feed King Pig mode, he will appear sometimes to watch what's happening, he will look to the sides and go away, he appears behind a pillar.

In Rise and Swine, Chef Pig was going to bring desserts for King Pig but Ross and his friends ran with a vehicle near him to get desserts but it ended up ruining them, which Chef Pig angrily said that they were for King Pig and that he will be angry.

In The Road to El Porkado, he cooked desserts for King Pig while they waited for Ross to come with the statue. When he was back with the statue, Chef Pig got happy. 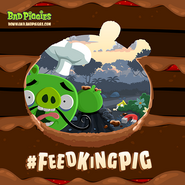 In the game, Chef Pig appears as Wizpig, the true antagonist of the game, he wears a dark blue wizard hat with yellow snouts instead of a Chef Hat.

He first appears in Star Reef Castle, Snowy Peak, Pig City and Hog Head Mountain as a boss, where in the last one he turns into Demonic Wizpig. He also appears in events, see his stats here and here and here.

Soundwave is a mix of super-loyal second-in-command and devious manipulator. No-one knows if they can trust him.

Soundwave is always lurking in the background, using his enhanced audio receptors to listen in and spy on all sorts of conversations. He stores all those juicy secrets away, using them at just the right moment to blackmail and cheat.

As a combination of super-smart manipulator and Piggy Island's top chef, Soundwave has been experimenting with Energon blocks. These powerful but quite explodey lumps of pure energy have been showing up since the EggSpark appeared, and Soundwave hopes to use them in his cunning schemes. Perhaps an army of Energon overcharged minions?

Matching his cunning use of audio, Soundwave's weapon fires 'sonic waves.' They're not super-powerful or fast firing, but they spread out as they travel. So if you aim carefully, Soundwave's shots can take out a whole mass of targets in one hit. Make sure you target the centre of towers, especially if there are lots of ice or wooden blocks!

Member of squaf: Instruments Of Destruction

As a combination of super-smart manipulator and Piggy Island's top chef, Soundwave has been experimenting with Energon blocks. These powerful but quite explodey lumps of pure energy have been showing up since the EggSpark appeared, and Soundwave hopes to use them in his cunning schemes. Perhaps an army of Energon overcharged minions?

His Energon overcharged weapon is enormously powerful, but Energon is volatile, so he takes a lot more damage, too!

Energon Soundwave fires two consecutive sound blasts at a time, but to balance that out, he takes longer to reload. You can hit two targets at once this way. Try timing your shots so you take everything out and reload to finish enemies off.

Soundblaster is a reborn, more powerful version of Soundwave. He's just as sneaky and devious but is stronger and tougher, and comes in a cool, black color scheme.

Megatron may be the leader of the Deceptihogs right now, but Soundblaster is just waiting for the right moment. He's calm, cunning, and makes a mean soufflé - what more does a leader need?

As a more powerful form of Soundwave, the same tactics apply. Soundblaster is excellent at knocking down towers or dealing with groups of flying pigs, but he's less effective against tough, single enemies.

His weapon can cause mass devastation, especially when the screen is full of block towers, so use his vehicle mode to get into position and cause chaos!

Member of squad: Instruments of Destruction 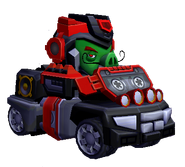 Vehicle Mode
Add a photo to this gallery

Chef Pig appears as Scientist Pig in Floor 10 of Dr. Pig's Lab after defeating Security Pig, he has a monocle and purple potion and a monocle as accessories.

Like all the characters in-game, he uses as Toons Design with separate sprites for movement.

Like said above, he is the second enemy fought on floor 10. Just like any other enemy, the player has to match birds to get enough protection to fight him. After the turns run out, he is shown to have how much strength he could match and his health is shown as ???, he is not strong and can be easily defeated with a strong bird.

As an ability, he will trap a bird in a stone block, preventing nearby birds from being matched as they can't be combined. After defeating him, the player has to fight Foreman Pig as Chief Pig.

As said above, he first appears in the level said, where he is in the wooden aircraft of Angry Birds 2, he is very strong in strength but in the level the wood is weak so making him fall and pop is easy. He doesn't blink and have expressions.

He then reappers in Piggywood Studios 2-26, where he is seen cooking for Leonard the same way he does in the movie as it's parodying the dinner scene. This time, defeating him is easy as the cauldron he is standing on is made of wood, but reaching it is difficult.

Chef Pig appears in level 6 of the Angry Birds 2 Tournament as a boss, he uses a Classic and Toons Design and has injured states.

He is vey strong and takes several hits to be defeated, but using strong birds will defeat him easily. He can get in injured state.

Chef Pig appears in the first official sequel to the original game, Angry Birds 2, as a Boss Pig replacing Corporal Pig. He is first found on level 1 where he sucks the eggs to the aircraft but is fought in level 5.

The game also introduced computer animation for the birds and the pigs, which had never happened with the previous slingshot installments of the series. (which used pre-set separate sprites for when the bird is idle, flies, etc) Chef Pig also appears in his Toons animation style, along with the voice used in the series.

Like said above, he is first fought in level 5, he is very weak at first, with any bird taking a large chunk of his health. However, as the player progresses, he becomes stronger, but Bomb and Terence can deal large damage to him. He is the weakest boss pig of them all and is the first fought on the areas.

When he is a boss on Water Levels, he will wear a buoy and goes to gaps, which often difficults defeating him but there's often an waterfall to make his defeat easier.

Chef Pig appears in Angry Birds Action! as a 2-hit enemy that wanders around the levels of Piggy Island. He uses his movie design but a bit bigger and has a knife and fork as accessories.

As said above, he appears wandering around the levels of Pig City, he needs to be hit 2 times to be defeated and is often seen during level where the player needs to defeat a determined number of pigs.

Another Chef Pig appears in Leoanard's Castle mixing the soup in the cauldron.

Chef Pig appears in the comments, talking with a french accent and talking about what he thinks about the game. Just like the other pigs, he tries to blame the Mighty Feathers for making the pigs lose the match.

He appears cooking in the icon for the daily gourmet, though he doesn't have a major role nor appears as an enemy.

Chef Pig first appears in the episode True Blue? trying to fool The Blues with Piggy McCool. He cooks desserts and more food for King Pig and seems to want to replace him. It seems that his moustache is also used as a hand when he is making expressions.

To see his involvement in the series, see here.

Template:Infobox character 2Chef Pig appears in The Angry Birds Movie as Leonard's chef that was cooking the eggs for him.

After the pigs stole the eggs, he was seen with a plunger mixing the hot soup where the eggs would be cooked, however Red stopped the net of eggs from falling into the cooking pot and Mighty Eagle made the liquid and cauldron fall on the floor, which Chef Pig had to escape it and escape from the explosion.

The Daft Piggies then brought him with a medical bed and they danced.

He was cooking pancakes during his show and throwing it to the ceiling to make it fall on the pan, however, it never fell back. He then got angry and mixed a lot of dough and launched it at the ceiling, which Fat Pig, that was eating the pancakes, fell on him.

He throws his pan with dough and mustache in the trapdoor, which Fat Pig jumped to eat the dough. 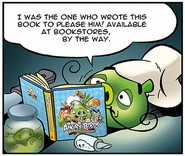 The Chef Pig as seen in the Christmas Comic. (Note: Bad Piggies' Egg Recipes can be seen.)

Chef Pig as he appears in Angry Birds Toons. 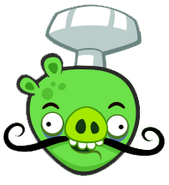 Chef Pig in his Lab. 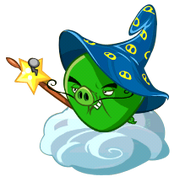 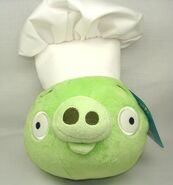 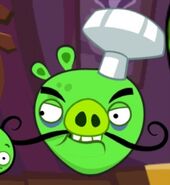 Chef Pig in King Pig's Castle as he appears in Bad Piggies. 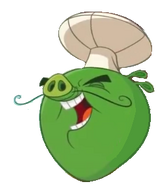 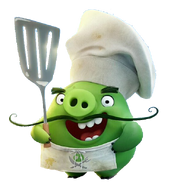 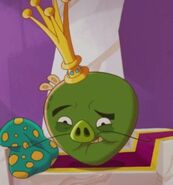 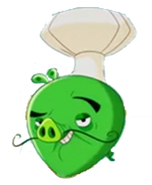 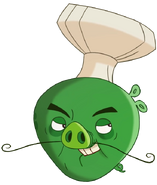 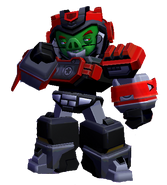 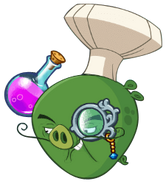 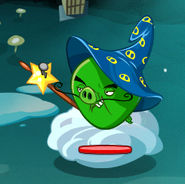 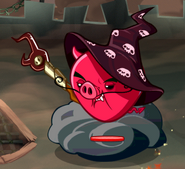 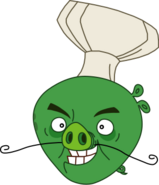 Vector image made by Cleopatry221987 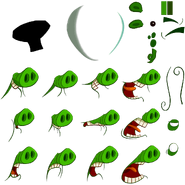 His Texture in Angry Birds 2 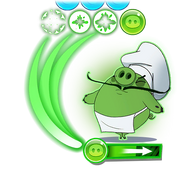 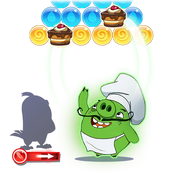 Retrieved from "https://angrybirds.fandom.com/wiki/Chef_Pig?oldid=283862"
Community content is available under CC-BY-SA unless otherwise noted.