Cherry Blossom (Kanji: 桜の花 Romanji: Saku-ra-den n'o ha'na) is the eleventh episode of Angry Birds Seasons, released on March 7, 2012. The game celebrates the Japanese Cherry Blossom Festival and takes place in the shadow of Mt. Fuji. According to a Rovio press release on March 5, "This newest episode, Cherry Blossom, focuses on the Japanese tradition of celebrating spring with a picnic with family and friends under the flowering cherry blossom trees. The episode consists of 15 levels.

FLOWER POWER
I had just got back from my travels when the alarm went up again. The eggs had been snatched while the birds were enjoying the Cherry Blossom Festival. Grrrrrr. Those pigs! Life on Piggy Island is usually a bowl of cherries, but this is the pits.

Just like Cherry Blossom, it is based on the same background and concept. Sakura Ninja is on Google Chrome extra. Instead of having no clothes, the birds are wearing all different types of costumes from Japan. The levels are different from Cherry Blossom. 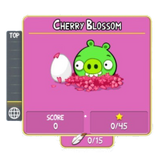 The episode card in the PC release 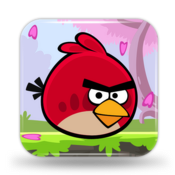 Golden Egg menu, before any Golden Egg is unlocked

An ad for Cherry Blossom in the Angry Birds website