Chester Cheetah is the mascot of Cheetos, a product made by Frito-Lay, a subsidiary of Pepsico. He appears in Angry Birds Cheetos and Angry Birds Vuela Tazos.

He is an anthropomorphic Cheetah with orange fur, various spots on him, a large tail with stripes, a white fur belly and jaw, a yellow snout with a black nose and some white fur parts. An interesting feature of this feline is that he always wears black shades and white sneakers.

Chester Cheetah makes a cameo in the game and a footprint of him was seen on the Angry Birds Chrome ad.

Chester Cheetah appears in the cutscenes using hunter gear. He helps the birds recover their Cheetos. He also makes a cameo on the level complete screen.

He appears in level 4, but he does nothing other than being a stationary character that watches the birds fling themselves. 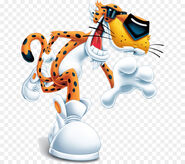 Credits on the image. Also, notice the Emerald Tree Boa.