Throwing his Hammer (in Toons style)

Absurd?!! There are rulers to be followed! Tradition to be honored! Customs and rituals that have made pigs the greatest of all creatures!

Chronicler Pig is an unplayable medium pig that appears in Angry Birds Toons, the Birdsonality Test and Career Test.

You'll have to speak up because this ancient piggy is a bit hard of hearing. He also forgets things, which is unfortunate as it's his job to remember them.

«The Chronicler Pig is a faraway. Persistent, analytical, and independent, he has a strong work ethic and is efficient at getting things done. However, his demanding nature - both of himself and others - can make it difficult for him to work in teams. He's at his best working independently on projects he has control over them.».

Chronicler Pig as seen in Night Of The Living Zigs comic. 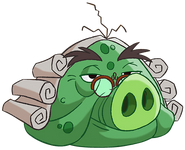 One thing you need to know about him.