Chuck Time is the first episode of Angry Birds Toons.

This episode marks the first appearance of Red and Chuck. It was aired on March 16, 2013.

When Chuck accidentally knocks Red off a precipice, the race is on to save him before he hits rock bottom.

Chuck and Red were installing the Slingshot on the top of a high mountain, but it began to topple over. Chuck saved it from falling, but in the process he accidentally pushed Red off the cliff. Chuck watches Red fall, but he then immediately activated his headband, making him faster at the cost of making the time go slower.

He then became side-tracked by a butterfly, but then noticed Red falling slowly, and resumed to his task. He prepared a bucket filled with water for Red to land in, but since the time was still slow-moving, Red would have taken a long time to reach the bucket. Bored, Chuck passed the time by doing a crossword puzzle, drinking a milkshake and relaxing in a chair, not realizing that the water bucket was out of Red's trajectory. By the time Chuck realized this, Red was very close to the ground. Chuck struggled to move the bucket, but to no avail as the water made it too heavy. Chuck realized that Red was going to be seriously injured, so Chuck dived under Red at the last second, saving him.

Time returned to normal, and both birds were alright. However, the slingshot then fell off the mountain and supposedly crushed Chuck. Red believed Chuck was squashed, but then saw Chuck in a beach chair, and was perfectly fine. The Episode ends with Chuck winking at the camera. 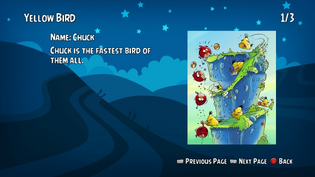