Clive is an Angry Birds Evolution bird that can be obtained at any time in the hatchery.

The eyes are the window to the soul...

But hey, at least Clive has a sturdy set of teeth!

His calling card reads: So my eyes are crazy... call me maybe?

Based on Steve Buscemi, he is an extremely small white bird with a gray bottom part that is shaped like a jacket, small wings that have white hands, a wine purple small beak with teeth, small purple talons, large eyes with blue irises, thin black eyebrows, dark blue hair and a small black feather tail.

Based on Crazy Eyes from Mr. Deeds, he has a bit of beard and wears a reddish brown jacket and brown hat with beige lines and non-connected straps.

He creates a shockwave, dealing 451 damage and pushing all enemies to the side.

He creates a shockwave, dealing 581 damage and pushing all enemies to the side.

All white birds in the team get 30% attack power. 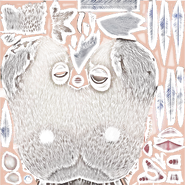 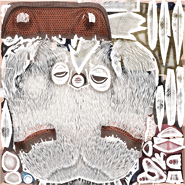