Attacks: Lightsaber to destroy blocks and leaping on a platform.

Cloud City served as the home of Han Solo's good friend, Lando Calrissian. Han, Leia, Chewbacca, and C-3PO had escaped to Cloud City after nearly being captured by Darth Vader and his fleet in hopes of finding refuge with Lando. However, Vader had reached Cloud City before Han did, and made a deal with Lando, promising the safety of the city in exchange for Han's capture. When Han and his friends arrived, they had walked into a trap. Han was tortured, and frozen into carbonite to be given to Jabba the Hutt. Lando then betrays Vader, and attempts to rescue Han with Leia and Chewbacca, but fail.

Meanwhile, Luke sensed that his friends were in danger while training on Dagobah with Yoda. Luke then sets out to save them despite Yoda and Obi-Wan Kenobi's ghost discouraging him to do so. When Luke arrives, he is confronted by Vader, and the two duel. It is here when Luke learns that Vader is his father. Refusing to join him, Luke jumps down a waste shaft and is rescued by Lando. 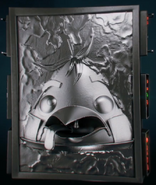 A level with the Boba Fett Pig.

Another level with the Boba Fett pig.