A level in the Cobalt Plateaus in its evening form

The Cobalt Plateaus is a location that appears in Angry Birds 2. It serves as the first of three locations in the World Map, though it can also appear in other modes.

The Cobalt Plateaus is a plateaus that is located on Piggy Island. Its terrain is high and mountainous, and has cobalt stone (hence the name) covered in luscious green vegetation. Soft mist clouds are also present. In the background, numerous mountains and airships of many shapes and sizes can be spotted. Spitting Flowers are plentiful in this area.

Levels in the Cobalt Plateaus take place during one of the following different settings:

Besides the regular Cobalt Plateaus scenery, chapters and levels can also come in two themes:

On top of the rocks, mountains and trees in the fore- and background lays a thick layer of snow. Snowflakes often gently float down all around the scene and icicles hang from the platforms on which the pigs build their fortresses.

Levels of the snowy theme often feature Ice Slides. Ice Slides are long or short tracks covered in ice on which birds, pigs and objects will glide. Birds that land on an Ice Slide after being flung will not start rolling, gliding across the track until it eventually ends or starts tilting in such a way that gravity will pull the birds back. Birds will not lose their special ability when hitting an ice slide and can still use their ability for as long as they are on one. This also goes for Matilda's egg. Pigs will also not pop when they fall on a Slide.

Geysers are also often present in Snowy levels. Geysers appear as a small crater in the ground, often closed off by a pig's head made of snow. When a bird or other object hits a Snowpig, it will pop and reveal the open crater underneath. A very strong stream of water will them come out, which turns to steam after a short while. The stream is so strong that it will blow everything in its path out of the way, often toppling whole fortresses located in front of it. Additionally, Geyser streams can blow birds that are flung into it away as well, allowing them to fly a lot further or inevitably blowing them away from leftover pigs.

Snowy levels can take place during the following settings (any differences from the regular Cobalt Plateaus settings are noted behind):

The scenery in this theme is almost the same as the regular Cobalt Plateaus variant, save for the presence of a body of water at the bottom of the level, which stretches all the way across the screen. Birds that are flung into the water will go underwater for a short while before buoyancy kicks in, and they will shoot out of the water at high speeds. Stone and ice blocks will sink to the bottom of water, while wood will stay floating at the surface. Pigs that fall into the water will sink too and will eventually drown, except when this pig is either a Floaty Pig or a Scuba Pig. Additional plant life in water levels include seaweed on the bottom of a level and cattail plants alongside the shore. More unique flowers also appear, as well as frequent blossoming trees.

Water levels can take place during the following settings (any differences from the regular Cobalt Plateaus settings are noted behind):

As with other locations, the main objective in the Cobalt Plateaus is to pop all the pigs in the levels. Said pigs might appear sheltered inside of structures. The player is given a limited deck of cards to launch their characters with a slingshot.

A closed off Geyser 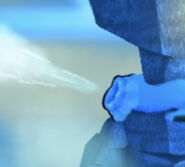 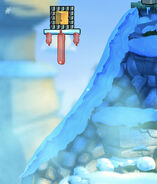 A waterfall in a Boss Battle 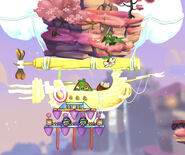