The player has to engage 4 Stick Pigs and 1 Rogue. Each enemy's stats are shown below.

The player has to engage Bird Catchers, Stick Pigs, and/or Rogues. Each enemy's stats are shown below.

And here is the encounter table:

The player has to engage Bird Catchers, Rogue Leaders, Rogues, and Stick Pigs. Each enemy's stats are shown below.

and here is the table of encounters:

This is mostly guided. You will attack using Chuck first before using Red's protect on Chuck. Then, attack Rogue again with Red before finishing off the pigs.

Take down the enemy with the least amount of health to reduce the damage your birds will take. Protect Chuck with Red's Shield at the start.

Lots of Common Pigs will appear in this level, so Chuck will find his main attack useful. Bird Catchers can inflict STUN on Red or Chuck, and Rogue Leaders can command all pigs to attack the same bird, so beat them first. 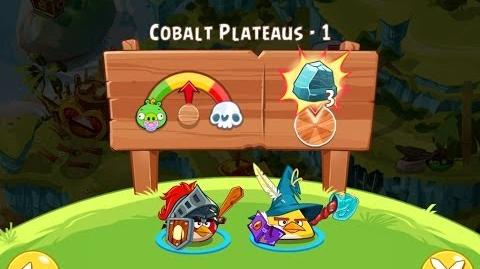 Retrieved from "https://angrybirds.fandom.com/wiki/Cobalt_Plateaus_-_1?oldid=217521"
Community content is available under CC-BY-SA unless otherwise noted.