The player has to engage 3 Stick Pigs and 1 Foreman Pig. Each enemy's stats are shown below.

Because Foreman is very strong, you will have to protect both birds by Red's secondary skill (supporting ability) first. Also, give Chuck his shock shield so if anyone attacks Chuck, the attacker will receive damage. Then, attack every turn with the Stick Pigs first. Then, attack Foreman every turn until the Rage Chili is full, then drag it to Red to use his mighty Rage Ability! If used correctly, he will have no more health remaining.

Foreman Pig can increase power of all pigs by 30%, so taking him down first is your priority. He also boasts the Incompetent Minions passive ability, so don't beat the weaker ones first, as his power increases by 25% for every defeated ally. 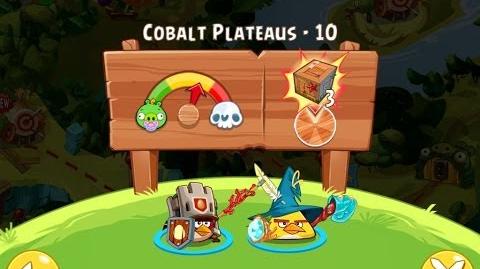 Retrieved from "https://angrybirds.fandom.com/wiki/Cobalt_Plateaus_-_10?oldid=268499"
Community content is available under CC-BY-SA unless otherwise noted.