Prince Porky is angry because the birds are here again. So he attacks Monty and runs away with the bag holding the Golden Pig Machine. Monty cries and runs after him. Then, he saw Matilda being very angry at him because they're the one who stole the eggs. So Monty have an idea. He jumps into her garden and jumps on her vegetables. Matilda cries because she loves vegetables and she needs help to get rid of Monty and save her garden.

The player has to engage 3 Stick Pigs and a Rogue.

The player has to engage 2 Pyropigs.

Attack the Stick Pig every turn.

Attack all the pigs but defend the team using Red's secondary skill first.

Now you have to engage 2 Pyropigs. When the Pyropigs are about to attack, use Red's secondary skill if it has worn off or you will most likely lose. Then use Chuck's secondary skill on Red or himself. If they have not attacked yet, attack use all birds until the enemies are defeated.

Lots of Common Pigs appear, so beat the tougher enemies first. Watch out for the 2 Pyropigs, as they can inflict VERY big damage! 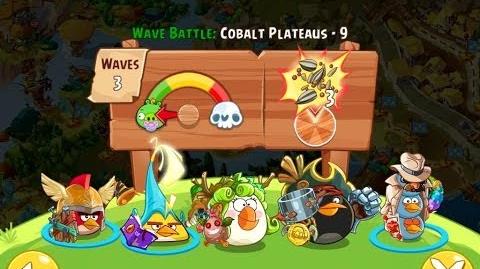 Retrieved from "https://angrybirds.fandom.com/wiki/Cobalt_Plateaus_-_9?oldid=217561"
Community content is available under CC-BY-SA unless otherwise noted.